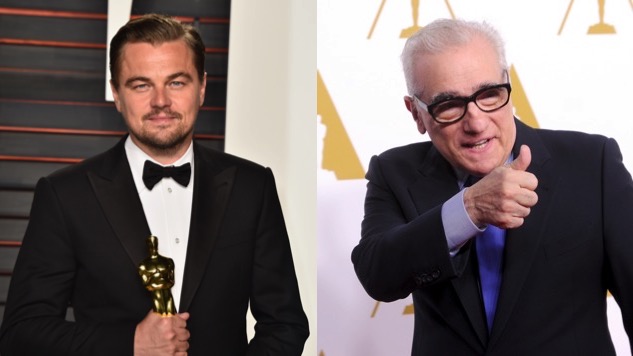 “Everything We Know about … ” is Paste’s series of deep dives into the forthcoming projects we’re most excited about. Explore them all here.

Martin Scorsese is one of the most towering and prolific figures of American film, known for directing Mean Streets, Taxi Driver, Raging Bull, Goodfellas, The Departed, The Wolf of Wall Street, The Irishman and more.

His expansive oeuvre has left an indelible mark on film history, with a filmography that often meditates on machismo, spirituality, consumerism and—especially with The Irishman—death.

Scorsese shows no sign of slowing down after the Oscar-nominated The Irishman. His latest project, Killers of the Flower Moon, will be an adaptation of David Grann’s true-crime book, Killers of the Flower Moon: The Osage Murders and the Birth of the FBI, published in 2017. The book focuses on the Osage Nation murders, also known as the Reign of Terror, which occurred in the early 1900s. Upwards of 20 members of the Native American tribe were killed after finding oil and accumulating wealth on the reservation. The film is expected to be released at some point in 2021.

The film will star two of Scorsese’s favorite collaborators: Leonardo DiCaprio, who has performed in Scorsese movies including Gangs of New York, The Aviator, The Departed and Wolf of Wall Street, and Robert De Niro, who starred in Taxi Driver, Raging Bull, The King of Comedy, Goodfellas and The Irishman.

Here’s everything we know about Scorsese’s new project so far.

On July 14, 2017, it was announced that Scorsese was preparing to direct Killers of the Flower Moon, with DiCaprio attached to the project. The timeline for the project, however, has had several delays since the news first broke.

Dante Ferretti, production designer for Scorsese’s The Age of Innocence, Gangs of New York, Hugo and Silence, told Variety that production was set to begin in 2018 and that he was heading to Oklahoma for location scouting.

On Oct. 24, 2018, The Film Stage reported that Killers of the Flower Moon was “finally confirmed to begin production in the summer with backing from Imperative Entertainment.”

Scorsese discussed his interest in the project in a statement at the time, saying, “When I read David Grann’s book, I immediately started seeing it—the people, the settings, the action—and I knew that I had to make it into a movie.” Scorsese then confirmed that DiCaprio would star and that screenwriter Eric Roth (The Curious Case of Benjamin Button, Forrest Gump) would join the production, adding, “I’m so excited to be working with Eric Roth and reuniting with Leo DiCaprio to bring this truly unsettling American story to the screen.” Production, however, did not exactly meet that anticipated summer 2019 schedule.

On July 26, 2019, Scorsese met with Principal Chief Geoffrey Standing Bear of the Osage Nation, as chronicled in an article from Osage News. Standing Bear told Scorsese, “We want to make sure your people have everything they need, in terms of Osage artisans, Osage language … those people are still here in the community and would love to help,” adding, “We are very thankful you are here and that you are willing to tell this story.” Osage News confirmed that De Niro will be playing vicious killer Bill Hale.

In February 2020, Scorsese gave some details about the tone of Killers of the Flower Moon. Andrew Todd of Birth.Movies.Death translated an article from the French publication Premiere on Feb. 18, in which Scorsese commented on the film, saying:

We think it’s a Western. It happened in 1921, 1922, in Oklahoma. They are certainly cowboys, but they have cars, and also horses. The film mainly talks about the Osage, a Native American tribe whom we gave a horrible territory, but which they still loved, because they said to themselves that the Whites would never be interested in it. Then we discovered oil there and for about 10 years, the Osage became the people richest in the world, per capita. Then as with the Yukon and the mining regions of Colorado, the vultures descend, the white man, the European arrives, and all that is lost. There, the underworld had such control over everything that you were more likely to go to jail for killing a dog than killing a Native American.

As of Feb. 18, 2020, The Film Stage reports that production is slated to begin in March 2020 and will be the largest film production in Oklahoma history. Dante Ferretti is attached for production design (after previously saying that he was not in a Variety interview). Rodrigo Prieto will work as the cinematographer and Thelma Schoonmaker will edit. It is anticipated that the film will see a theatrical release in 2021.

The most recent revelation in terms of plot was the announcement that the film will be a Western. Unfortunately, that’s not giving us that much information to work with plot-wise, and it’s not clear how Scorsese and screenwriter Roth will be adapting the nonfiction book. But we do know that two central characters will be Ernest Burkhart and Bill Hale, the latter of whom called himself “King of Osage Hills.”

Scorsese says that the majority of the cast, however, will be Native American, according to the Premiere interview (via Birth.Movies.Death):

[Aside from De Niro and DiCaprio, the cast will be Native American actors. It’s so interesting to think about the mentality that leads us to this. The history of civilization goes back to Mesopotamia. The Hittites are invaded by another people, they disappear, and later, we say that they were assimilated, or rather, absorbed … It is fascinating to see this mentality which is reproduced in other cultures, through two world wars. And which is therefore timeless, I think. This is the film that we are going to try to make.

Paramount Pictures is set to distribute the film, according to The Film Stage, and Imperative Entertainment is still attached, as per IMDb (which is not yet confirmed). THR reports that Imperative first optioned the film in 2016.

Since production has hit some delays over the past two years (perhaps because of the four-year process of making the epic The Irishman), we can’t be too sure when the film will be released. A premiere date has certainly not been announced, but it seems like a production start in spring 2020 is imminent.

In addition to Killers of the Flower Moon, Scorsese has been in the news lately for sending Bong Joon Ho a congratulatory letter after the 92nd Oscars, where Parasite beat The Irishman for Best Picture. Bong said, “[Scorsese] said I did a good job and should rest, but only a little because he and everyone else was eagerly waiting for my next film,” according to THR.F

Bong Joon Ho on the letter he received from Martin Scorsese after PARASITE’s historic Oscar wins.

Scorsese, a man who apparently never rests, is also set to executive produce a series (alongside collaborator DiCaprio, among others) for Hulu based on Erik Larson’s book The Devil in the White City: Murder, Magic and Madness at the Fair That Changed America, as per Variety, and will executive produce Paul Schrader’s The Card Counter.